It’s quite warm when the sun is out … Using the Sand-Free Tarps as shade flys really helps us establish a cool area away from the Mosquitos under the cotton wood grove this year. We filled two five gallon water jugs to settle river water in for filtering later. We snacked on almond butter/raspberry jam sandwiches for lunch

We cooked a late lunch of crab cakes, read, took many photos and HD videos. Captured images of the river sky, and weather the first full day at camp as the clouds moved in for some thundershowers and a big squall that had us scrambling to button up camp, drop our “shade sail” and take refuge in our MSR Mo-Room Tent… Some baby powder fine dust made it into our tent via the 40 mph gusts… It wasn’t too bad. Next time we will button up the tent better and sooner when we see a storm approaching.

We also learned a lesson about leaving ground plastic exposed to the rain that will gather under the vestibule making a muddy mess. Better to tuck that all under the fly if it rains.

We were in the tent from 6:45pm Friday till around 8:00 am or so Saturday morning with almost constant showers moving throughout the evening. The skies were still unsettled, moody and stormy as the sun created spotlights/”god-beams” on the cliffs, mesas, bottoms, and river… In a spectacle of changing light,

Ray had early morning equilibrium issues due most likely to a lack of dinner, maybe being a bit run down, lack of hydration, and warmth we aren’t used to. He had lots of water, vitamins, Emergenz C, and a couple of extra hammock naps under the Cottonwood grove to re-establish his internal gyro stabilizer. After a sufficient fasting from beer we tested his ability to walk normally after looking at Polaris then his feet then walking a straight line.

Omletes with chorizo, cheese, green onions, fresh roasted green chilies, and cilantro with Whole Foods Blend freshly ground whole bean coffee in a French Press has made two of our morning starts this first week. We had rice pudding and a fruit berry smoothies the other morning thus far..

We have been greeted by the usual pair of Ravens each day who perch and make an amazing set of calls. some days more talkative than others. When they fly, it is so silent here, there wings almost “squeak” as they move through the stillness of the morning.

Lori has seen a couple of little toads and frogs. One the night we had our rain she saw a small frog on the trail. A couple of mornings later she was startled by a “jumping rock”. A very tiny toad who blended perfectly into his surroundings but would startle you as a pebble who would fling itself across the landscape.

Ray has found that by “feeding” the local ant colony close to the table it greatly reduces the amount of ants around our feet in and around our kitchen and dining area.

We have really started to settle in to “river time”. We are up after sunrise but before Mesa rise, when the sun first hits the Mesa walls behind our camp canyon along the river… This gives us enough time to enjoy the cool of the morning with our coffee before finding refuge under our shade sails to cook breakfast.

Ray has been able to keep all of our electronics (iPad, iPhones, camera batteries fully charged) with the new solar panel. It provides 110 ac as well as 12 volt and packs smaller than a small sleeping bag.

Thus far the Yeti Cooler with gel packs has worked well. It was a bit of a chore making space and moving perishables from the soft side cooler to the Yeti.. But we were able to bring more and should be able to keep cold longer over the 15 day.
It really is a treat not dealing with the limitations and liabilities of ice.

That said is a solar powered ARB freezer in our future? 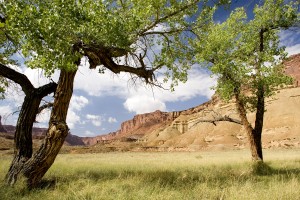